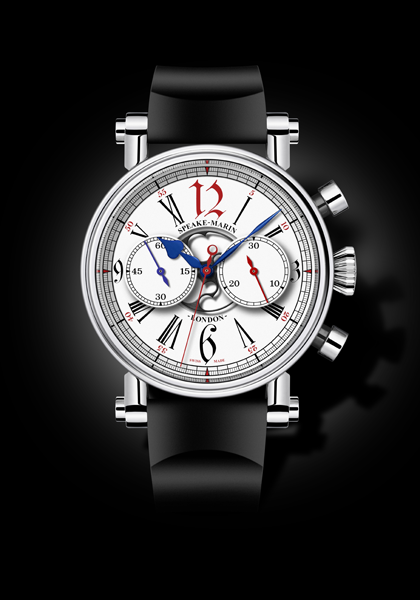 The London Chronograph is a tribute for Peter Speake-Marin to his first steps as watchmaker when he restored antique watches in the Piccadilly arcade in London. After qualifying as a horologist at London's Hackney College, Peter went to Switzerland to deepen his knowledge of watch making at the Watchmakers of Switzerland Training and Education Program (WOSTEP) in Neuchâtel. Following his first three commercial watchmaking positions which were short lived, due to his hunger to grow as a watchmaker, he met Georges Somlo in 1990 and stayed in the arcade restoring all manor of early pocket and wrist watches during 6 years.

The London Chronograph is a special edition in many ways, by its number of pieces being made, but also by its heart. It is powered by a Valjoux 92 made during the 1950’s and 60's. As with many mechanical calibres the quartz revolution in the late 60's cut short the life of such calibres.

The movements used for the London Chronograph were purchased by a collector of vintage movements and stocked in a safe for many years, waiting to be part of this special edition, dedicated to the roots of Speake-Marin. Today these calibres are rare, it was chosen by Peter for this project, because it is the same type of movement that he restored during his time in London during the 1990’s.