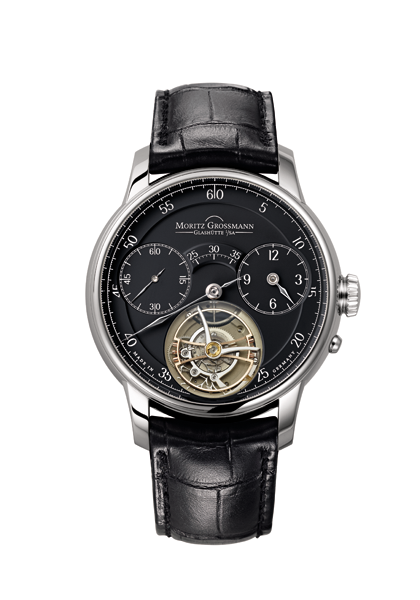 In 2010, the name BENU saluted the impressive genesis of the MORITZ GROSSMANN GLASHÜTTE I/SA brand. As the young manufacture's first manually wound watch, the BENU embodies the horological precision of Moritz Grossmann, the elegance of his timekeeping instruments, and conceptual aspirations of the watchmakers at Grossmann in the 21st century. Their ambition is to meld micromechanical ingenuity and traditional artisanship with latest-generation technology in the form of exclusive masterpieces that epitomise high-end watchmaking.

The appearance of the BENU Tourbillon reflects the lineage of its model line. Its slender three-part case in 750/000 white gold tapers out along the gently curved strap lugs. The elegant narrow bezel directs the focus on the crisp displays and the aperture for the unusually large Grossmann three-minute tourbillon. The three-part solid-silver dial has a symmetric face. To make the decorative element of the tourbillon at 6 o'clock consistent with the accurate legibility of a precision timepiece, the seconds and hours are displayed on two recessed, off-centre subsidiary dials. Their manually crafted hands have distinctively different shapes. The hour hand, in keeping with its function, is more prominent to assure unambiguous readings of the time.

The instrument-like appearance of the BENU Tourbillon is emphasised by the refraction of the crisp minute scale in the chamfer of the sapphire crystal. The time range from 25 to 35 minutes, which is interrupted by the tourbillon aperture, is precisely readable thanks to a rearward extension of the minute hand that sweeps the scale arc on the opposite side. A patent application has been filed for this dual minute display arrangement. Endowed with easily legible Arabic numerals and wispy-tipped, filigreed hands crafted in-house, the BENU Tourbillon stands out like a prime example of the aesthetic 19th-century precision measuring instruments for which Glashütte was acclaimed.