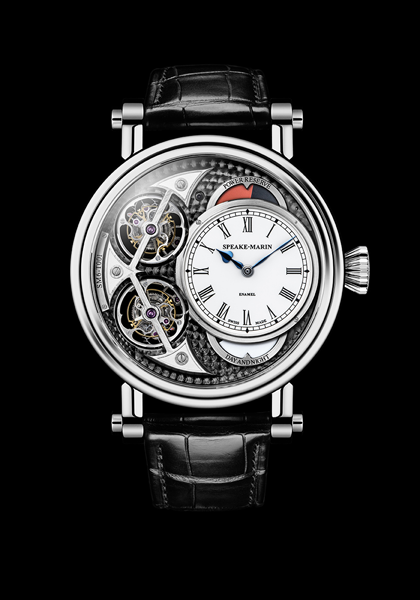 A tour of the dial side begins with the oven-fired enamel subdial with the hours and minutes displayed by Speake-Marin's signature Foundation hands in heat blued steel. Just above the subdial is a 72-hour power reserve indicator displaying available power by means of a cam-shaped disc that opens when fully wound to reveal the gears and mechanisms below, and gradually closes and signals empty when a red section of the disc reaches the central marker Under the subdial is a day/night indicator visually balancing the power reserve indicator above.

However, it is the synchronised pirouettes of the twin tourbillons vertically aligned on the left that quickly attracts the viewer's gaze and grips it tightly. A single massive bridge, impeccably hand finished with mirror polished internal bevels, supports the upper side of both tourbillons. Each tourbillon has its own independent gear train powered by its own mainspring barrel. The two barrels are wound simultaneously via the crown. A miniature limited-slip spring gearbox – the spring absorbs and balances any subtle variations between the two cages – called an équilibreur de marche (rate equalizer) links the two tourbillon regulators.

The proportions of the generously sized 46 mm in an 18K white gold Piccadilly case have been deliberately considered, allowing both space for a large and legible time display as well as room for the tourbillons to be fully appreciated without being crammed closely together.