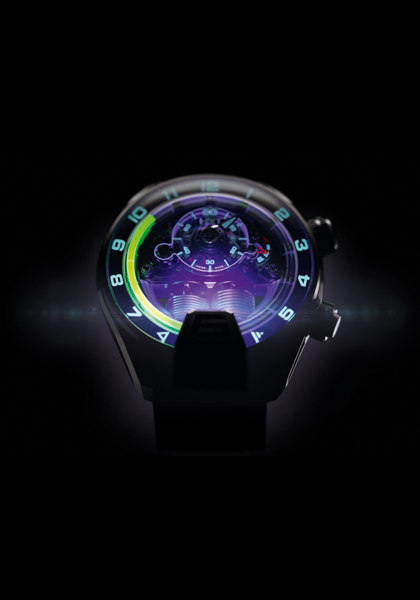 The H4 Metropolis is a piece equipped with a light source. Under the rider at 6 o'clock, HYT has concealed two LEDs. Once activated, they flood the entire dial with blue light. At night, the green fluid is energised by this light source, becoming perfectly visible. At the same time, the wash of light flows into every nook and cranny of the calibre, literally bringing this skeleton architecture to life, and defying the laws of watchmaking.

The generator has been nestled between 4 and 5 o'clock. It is invisible, and activated by the push-piece located opposite on the case middle. The process is broadly that of a dynamo: converting mechanical power into light energy. It is the rotation of the push-piece at 4:30 that winds the generator. Pressure on this same push-piece then activates the two LEDs which bathe the Metropolis in a soft blue light.

This illumination is possible for a maximum of five seconds, after which the mechanism must be reinitialised. No battery is needed for this process, which is fully mechanical. Three factors made it so tricky to develop: the extreme miniaturisation, the curved shape, and the fact, once again, that no development of this type had ever been achieved before.

The H4 Metropolis will be released as a run of 100 pieces with a 51 mm titanium and DLC case, available from October 27 2015 previously at Colette in Paris and worldwide from mid-November.